trek down to the Muong home-stay on the shore

After the third time Zack pulled me out of the mud and I attempted to scape off the 5 pound load of clay I was involuntarily carrying on my sneakers, I began to wish we’d been more persistent about doing something else.

We were on day two of a four day hiking, biking, boating trip around Mai Châu and Ninh Bình, 3 hours south-west of Hà Nội. The past two days had been full of pretty scenery, friendly people, good food and a fair amount of confusion. This began the moment our driver – who we thought would be with us for the four days – pulled over and announced that we were to take our bags (veges for that night’s dinner included) and walk for the next three hours to our home-stay. He then turned the car around and promptly drove back to Hà Nội.  So there we were; Zack, myself, two backpacks, four plastic bags of groceries and our guide, Em Cư… a young woman who was simultaneously very lovely and very vague.

The next two nights were spent with families in their homes; stilt houses built from local timber and bamboo. This is what we had signed up for and using our very limited Vietnamese we passed two enjoyable and slightly awkward evenings in broken conversation over wonderful food and homemade rice wine before hunkering down on straw mats next to the rest of the family 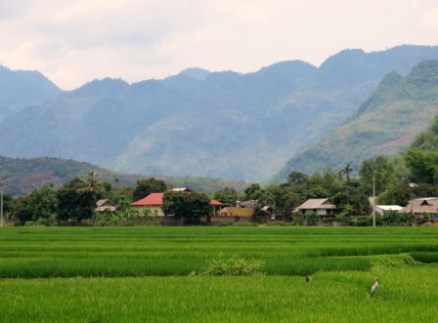 Biking through the valley

Night one we were hosted by a Muong family on the banks of the Black river (actually a beautiful shade of blue) which has been dammed for hydro electricity. The evening light on limestone hills rising steeply out of the water was beautiful and well worth the trek down the hill. The second day found us kayaking on the river and biking through rice paddies in the morning then covered in sticky clay by the evening. Lunch was complimented by the rumbles of thunder and a sudden downpour. Upon a long discussion with the guide about the possible options for avoiding a 10km hike in the rain we finally settled on a 10km hike in the rain. After about 30 minutes of talking we realized that the option was… no option; Despite what the travel agency had promised, it turned out that the options for activities were already set in stone, or bogged down in mud so to say. The walk was very pretty and the trail wound through rainforest and over a pass into the neighboring valley. Although the hike turned out to be only about 6km, Em Cư kindly forgot to mention the 3km mudslide into the next village. Upon slipping and sliding into the home of a White Thai family, Zack and I were introduced ourselves in bad Vietnamese, dripping (from rain and sweat) and covered in mud. Em Cư, by the way, looked cool, calm and collected. The weather was hot, sticky and (when it wasn’t rainy) sunny, I thought I’d developed a tan on my legs until I stood under the tap and watched the colour run into the drain. 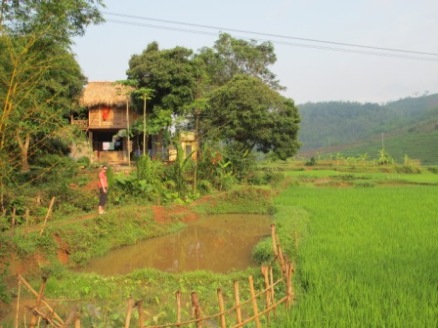 We commenced days three and four in what we now considered the general state of ambiguity. After a 3 hour hike from the White Thai family, a car appeared to take us to Ninh Binh – an unexpected 5 hour drive along a narrow road in a general state of disrepair. Ninh Binh is a dusty, industrial town surrounded by limestone hills and concrete mines. We stayed in a small guesthouse in what I suppose could be called the “suburbs”. Although it was in the middle of the rice paddies. We were there to experience (unbeknown to us) Tam Cốc, a series of three caves only accessible by a small stream, we were under the false impression that we were headed to the nearby Cuc Phuong National Park. Nowhere, thus far, has felt touristy and we saw very few people other than the locals. Tam Cốc, however, which hosts thousands of Vietnamese and Chinese tour groups, was a completely different (although still enjoyable) experience. 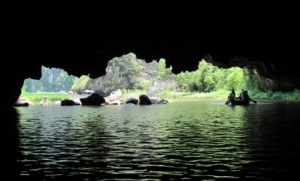 We organized this private tour with a recommended company called Ethnic Travel and all in all we had a really great time.  Em Cư was very nice and tried to be as helpful as possible, we stayed in small farming villages and we enjoyed the activities (mud exempted). Although we would have liked more details and flexibility perhaps this is just part of life in Việt Nam? Go with the flow!